Monika Patel shares a story about her desire for catching those powdery-soft, crystallized snowflakes on the tip of her tongue. But longing knows no discretion, and Monika learns that like all things too good to be true, her greatest joy also brings an element of danger. Fall into Monika’s dreamy winter wonderland to read how she learns to be patient while waiting for the season’s postcard.

Untouched for miles — a sheet of white, slow-sinking, fluffy powder; I was sixteen when I first saw snow in the Alps during a visit to Geneva. It was exciting to touch, feel and compress into snowballs. Many years spent in India meant I was cut off from the world of snow, apart from these occasional ski trips which did not count. Downhill skiing is a sport that I love, not just for the exhilaration of how the wind feels in my hair as I whoosh down a slope, but also for the soft cushion that catches me when I fall.

My yearning for snow remained unrequited and I went about my non-snowy life harbouring a secret desire to roll in fields of pristine white. A few years later, I studied in Calgary, Canada, and I still remember my childish glee during our first winter there as I walked around with my tongue sticking out, trying to catch as many snowflakes as I could. Once I moved to North America, my longing for snow was satisfied over and over again. My excitement was rather esoteric. It was about basking in the glory of the natural phenomenon and indulging the landscape photographer within me. I loved how the whiteness would gleam on the ground creating a flawless cover.

The change of seasons, however, is a lesson in patience. When April melts away the last snowbanks and summer drives away all memories of winter, a little part of me rejoices because I know that my longing lurking beneath the surface will burst forth in abandon once autumn comes and goes.

This past winter I scanned weather channels and anxiously watched forecasts in anticipation of a much-awaited snowfall. Time went on, and the weather stayed warm. I felt nervous because I had planned to hit the slopes at least once in the season and desired to feel the familiar skis beneath my feet, the numbing of my nose on the chair lifts, and the thrill of rushing down a mountain. It began to seem that these wintery dreams might just be dreams. But, then, we had a visitor. His name was Jonas.

As a single woman, I wish I could say Jonas was the new man in my life. But this Jonas was different. My tryst with Jonas was shared by 85 million people in about 14 states of America. While Jonas might have fulfilled a desire for me, not everyone was happy with his visit which caused trepidation even before he set foot in the north eastern parts of the country. The build-up to his arrival was ominous and grocery stores were emptied with anticipation. He came around nine o’clock on the night of January 23rd. Jonas happened to be the second biggest snow storm to have ravaged the United States.

While Jonas was expected to do extensive damage, we got off easy. Most of us did not lose electricity and the stacks of batteries I hoarded did not need to be used. I was planning to wile away the time by simply reading. Instead, I found myself scurrying from window to window—camera in hand—dashing outside to capture and record this storm of all storms. It wasn’t a bad way to entertain myself on a Saturday. Since I was safe at home and not battling the roads, I gleefully indulged the child in me and frolicked around, sinking and sliding, making snow angels and feeling the drift of the snowflakes fluttering onto my face.

My heart went out to those hundreds of homeless though. I was also amazed at the tenacity shown by the news reporters who seemed to be all over the country providing us with ‘breaking news’ and weather updates. News junkie that I am, I channel-surfed between the different stations. I did not feel isolated at home. Instead, I was in the thick of it with everyone else encountering Jonas. The mass sharing of our experiences provided a sense of community; neighborly feelings abounded with people helping each other. Mother Nature had truly decided to teach us all a lesson in humanity.

My longing for snow did not factor such a spate of calamities. My dream of snow was gentle and soft, fluffy and fun. My yearning was for entertainment and visual satiation — not destruction. Jonas jolted me: I realized how one person's longing can be another’s peril.

Of course I cannot minimize the fact that lives were lost during the storm. Some as a result of car crashes, and others as a result of shovelling huge masses of snow. There were traffic pile-ups, stranded travelers and those affected by coastal flooding. My longing for snow did not factor such a spate of calamities. My dream of snow was gentle and soft, fluffy and fun. My yearning was for entertainment and visual satiation — not destruction. Jonas jolted me: I realized how one person’s longing can be another’s peril. Mother Nature was having the last laugh. The next day dawned bright and sunny. I took the opportunity to climb and sink deep—camera in hand—into piles of snow for the right shot. People were clearing driveways and walking off cabin fever. Life slowly began limping back to normal.

I was shocked to hear my area had the second highest snowfall of 29 inches. It was as though we were in the eye of the storm. Did Jonas like me that much, or was it a manifestation of my secret longing for snow? Whatever it was, one thing is for sure: in that twenty-four hour period, snow taught everyone to enjoy the small stuff. It took our minds off elections, terrorism, immigration, paying bills, email scandals, gun laws, exams, deadlines, illnesses and chronic ailments. And the crowning glory for me — I slid and sunk, but managed to climb to the top of my own little snow mountain and felt as though I had conquered Everest. 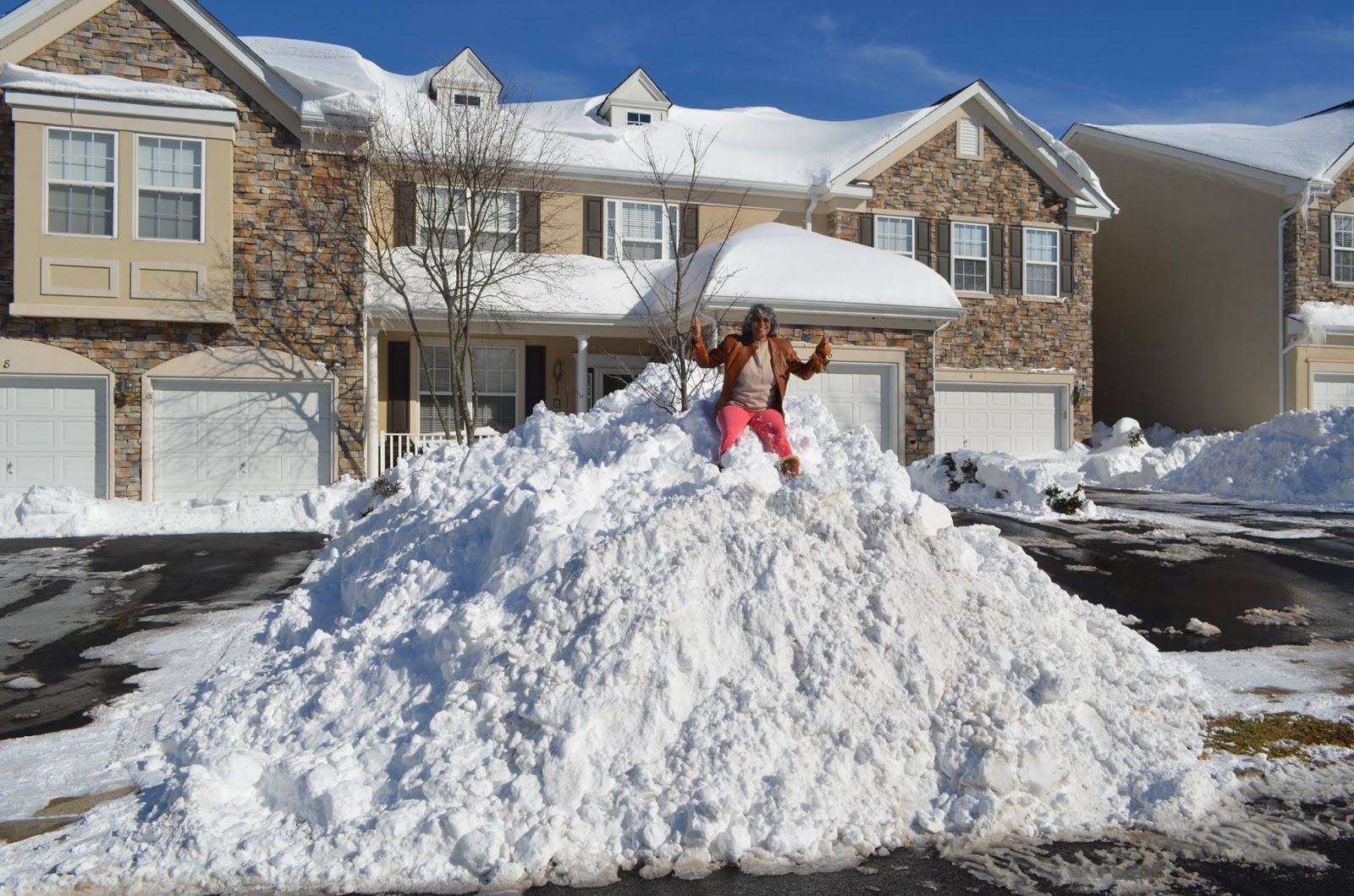 Monika is a wanderer at heart and has always been interested in stringing words together. With her two sons—Aniket (24) and Tarish (21)—now grown, she feels the world is her oyster. She started her career in journalism in Pune, India, with a column in Midday titled , ‘Monika’s Musings’.  She freelanced for other Pune publications as well as several national magazines in India. Her interest in writing led her to pursue a Diploma from the London School Of Journalism. Monika currently lives and writes in New York.