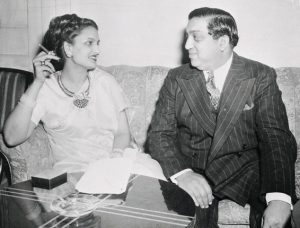 12 Aug 1948, Manhattan, New York, New York, USA — “Vacationing” Ruler Faces Storm Back Home. New York: The Maharajah of Baroda, who is in for a crisis back home, takes life easy with his beautiful Maharanee at the Waldorf-Astoria during their visit to the United States. The Maharanee is smoking a choice Havana cigar. They left New York recently on the S.S. , and on arrival in England, were greeted with the news that critics in the native legislature of Baroda were clamoring for his return to that princely state to abdicate. The verbal brick-throwers claim that the Maharajoh dipped into the state treasury for ten-million bucks for his six-week “vacation” spending spree. In no apparent hurry to go home and resign, the Maharajah is taking life easy at his Surrey country home in England. His attitude to the legislature’s abdication demand is that no one has the authority to ask him to do so. — Image by © Bettmann/CORBIS