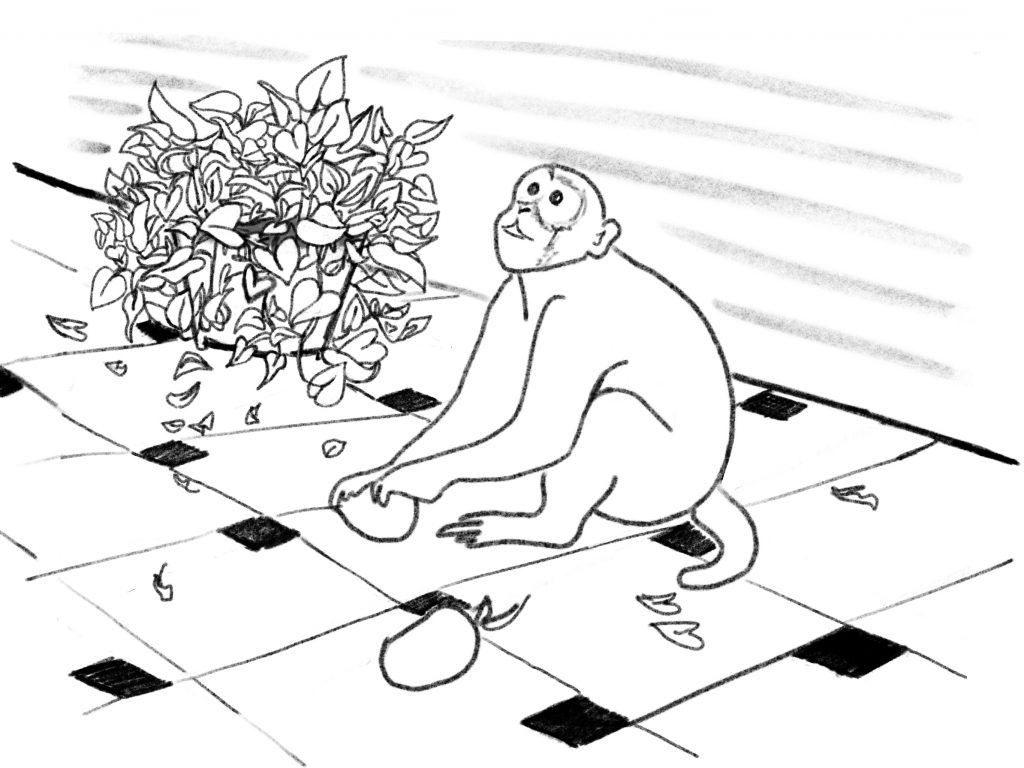 Words and illustration by Shikha Subramaniam

My grandfather was an engineer in the Indian Army and he was posted in Jammu with my grandmother, their four daughters, and two dogs. Their neighbours had a monkey, irreverently named Bhutto – after the prime minister of Pakistan. I learned from my mother that my aunt, a curious girl at seven, once sliced open her shoulder to see what comes out of there. (Don’t try this at home, kids; the answer is always blood.) She loved animals and made it a personal goal to become best friends with that monkey.

She would go over most days after school and play with him, at first gently and from a distance, but as time passed, she grew more confident, and maybe one could even call them friends. One day, she skipped over to the neighbour’s home; Mrs. Banerjee warned her that Bhutto was a little cranky that afternoon. “I’ll take care of that nugget,” said my aunt confidently, thinking she could tame her best friend and get him to come to an understanding. She went over to where he was sitting, picked him up, and placed him on her lap. Bhutto must have been indignant and outraged, because he reached over and slapped her hard on her face. She screamed, he jumped off, and before Mrs. Banerjee could even come running out of her bedroom, my aunt ran out the door with a burning-red, monkey paw-shaped mark on her cheek, and never returned for as long as Bhutto lived.

A few months after they were married, my parents went on a hike to Vaishno Devi, a temple on a mountain top in Kashmir. Devotees and tourists travel long distances to get their prayers answered at this holiest of grounds, but my parents liked the adventure and had heard the view was worth the long trek upward. They were warned of roguish monkeys that blanket these hills in search of backpackers’ snacks and trinkets, so my mom clutched her bag close to her chest. As they trudged on, they grew weary and my mom’s bag now limped from one shoulder. In a flash, a monkey snatched her bag and crouched in front of them cheekily to see how the humans would react. My dad, fueled by a rush of adrenaline, smacked that monkey hard on his face, and the poor monkey dropped the bag and made his shamefaced getaway.

Diwali usually meant a week of visiting friends and family with gifts, cleaning our houses, and lining balconies with candles and string lights so that the entire neighbourhood lit up like a row of fairy-light decorated cakes. The festival of lights needed even more illumination than this, thank you very much, so it all led up to the pièce de résistance – firecrackers. They came in all shapes and sizes and prices, for all ages and dispositions, to be burst in parks, on the streets, in balconies, on rooftops, anywhere you could find open air. This is back when there weren’t banned or seen as being directly responsible for air pollution, noise and otherwise.

On Diwali night, our family and friends were gathered in the nearby park. My brother Rohan was six and excited to be initiated into this tradition, but understandably cautious of the heat and fire thrown off in all directions, so he stood in the periphery of our imperfect circle, holding my mom’s hand. Everyone was so focused on the attraction in the middle and nobody saw that little monkey slinking towards us in the dark. He grabbed Rohan’s hand and scratched him; Rohan shrieked, and the monkey ran away.

A visit to the doctor and a tetanus shot later, Rohan was dejected, not for the most obvious reason, but he claimed that he recognized that little monkey. He said it was the same one that he fed bananas to earlier in the morning from our balcony. He had thought it was a sweet moment of bonding and was now shaken by the hostility. My mom convinced Rohan that the monkey was scared and having recognized Rohan in the park simply reached out to him for help. She went on to say that since monkeys don’t cut their nails every Sunday like we do, he probably scratched Rohan without intending to do so.

Paati was sitting on our balcony and enjoying her late morning break after everyone else had left — my parents for work, Rohan and I for school. Her saree was fluttering in the gentle breeze. She had her breakfast rolled up as she looked at the hibiscus tree that spilled onto her feet and the birds’ nests among its branches. A monkey that must have been furtively perched on a branch, leapt onto the balcony and crouched on all fours in a position to strike. After all these years, Paati recognized a hungry monkey when she saw one. In a gesture equivalent to raising a white flag, she cautiously offered the monkey her rolled-up dosa. The monkey slapped her hand away and the dosa went flying as he ran inside the house. In shock, Paati followed after him to see him sitting on top of our dining table. The monkey carefully lifted the casserole lid and unwrapped the layer of cloth. He bunched up all ten rotis in one hand and galloped back out the way he came from. Whenever Paati tells this story now, she ends it with, “…and that’s when I realized, he must have been a North Indian monkey.” 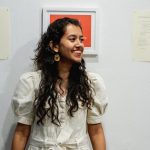 Shikha Subramaniam is a multidisciplinary designer and artist currently living in Brooklyn, New York. She works as a UX Designer on the experimental storytelling team at The Washington Post. Originally from New Delhi, Shikha graduated from Pratt Institute with an MFA in Communications Design and has worked as an Interaction Designer at Code and Theory for 4+ years. Discover more of Shikha’s work on her website and Instagram.