American photographer Barbara Macklowe’s book India: In My Eyes is a visual feast which chronicles her personal journey to the bustling Indian cities and remote tribal villages of a vast and colorful land. She has captured the spirit of India and its people with photographs that are filled with emotion and movement. Through the beauty and chaos in the scenes of everyday life that unfolded before her, she has written her love poem to a country that she longed to discover intimately.

India Through the Eyes of Barbara Macklowe 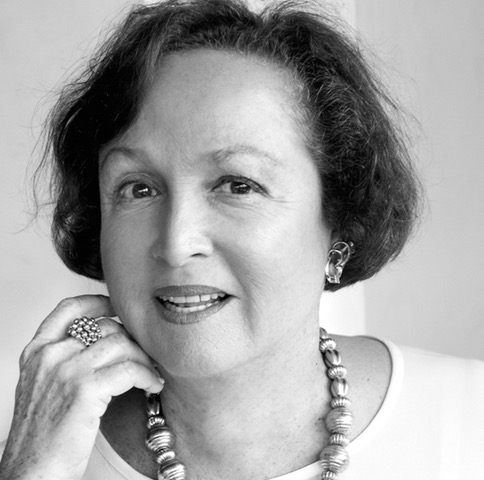 J’AIPUR: When did you first know that you wanted to be a photographer?

BM: Taking photographs, and becoming a photographer, are entirely different pursuits. I had always taken shots of family, on vacation, and later of my garden in East Hampton, with a point-and-shoot camera, but became serious after a friend suggested that I had a “good eye and should buy a real camera.” I bought my first SLR camera and rolls of 35 mm color slide film in the year 2000 and was determined to learn photography from the ground up. I began with analog even though digital had already entered the market.

I became more and more interested in flower and garden photography and it led me to purchase a macro lens as well as a wide angle lens after a class at the New York Botanical Gardens. I read many books by the experts, took several week-long workshops, attended seminars and classes as my obsession with photography began. This obsession has never left me and I have risen to greater heights within my search to become a better photographer and artist.

Also, I knew that I wanted to be a photographer when I attended a photo workshop in Holland. I saw that the quality of my pictures and the originality of my work had become very important to me. I was still learning the basics of photography but I already knew that I had a story to tell that was different. I wasn’t quite sure of how to go about it and tried many techniques which foretold the color washes and dreamy sequences of abstract work that I did in later years. There was so much to learn: terminology, F Stops, working in manual mode, using manual focus, stepping up and down, using slow film. 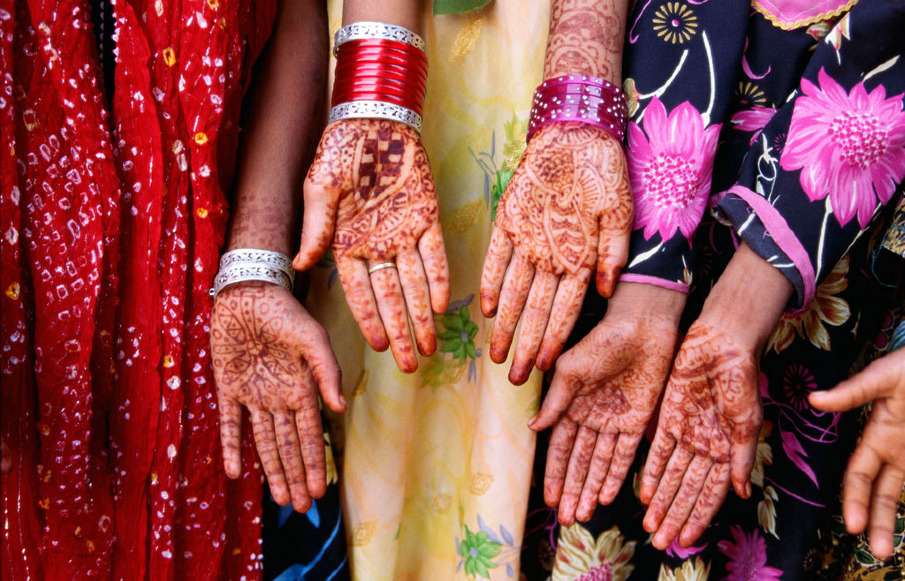 J’AIPUR: Of all the places you visited in India for the book India: In My Eyes, which one had the most impact on you, and why?

BM: Varanasi, or Benares, as it is known to the Hindus of India. It is the holiest city in the country. People come from all over to bathe in the waters of the Ganges River which is considered sacred. They come to be purified and to cremate their dead. There were lit candles floating all around us as we viewed the religious ceremonies on the ghats. I felt an extremely strong power and spirit surrounding me when I was there. It drew me in and didn’t want to let me go. My eyes could barely rest on any subject before being drawn to another. My time there was too short and I hope that I can return one day. 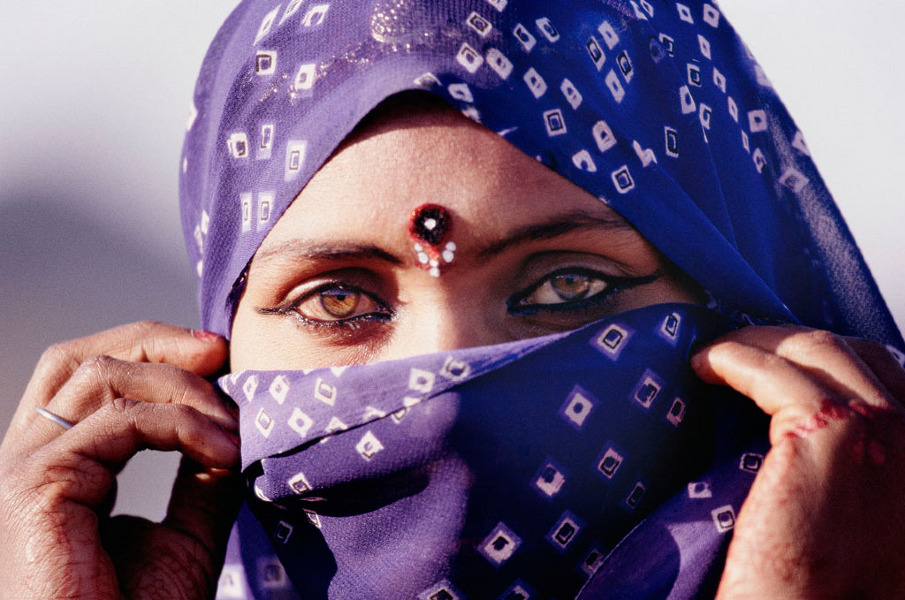 J’AIPUR: What is your favorite image from the book, if you had to pick one, and why?

BM: To choose from your ‘darlings’ is the most difficult of all. Remember Sophie’s Choice. The original image which was used as a crop for the cover is the one I would pick. It is a mesmerizing image. I remember every minute with that beautiful woman during the photo session as she was willing to pose for us for a small sum. That specific photograph sent an electric shock through my entire body when I made it. She and I had had a short conversation using only hand movements and smiles and introduced ourselves by name. I did a favor for her and she gave me that exquisite photograph later on when I called out to her by name as we were shooting. I have two other photos of her in my book and both are gorgeous, but this one is the best. I was recently written up by Artnet during the opening of The Photography Show by AIPAD in New York City and this image was used to describe my work in their “Ten Remarkable Photographers to Discover” piece. 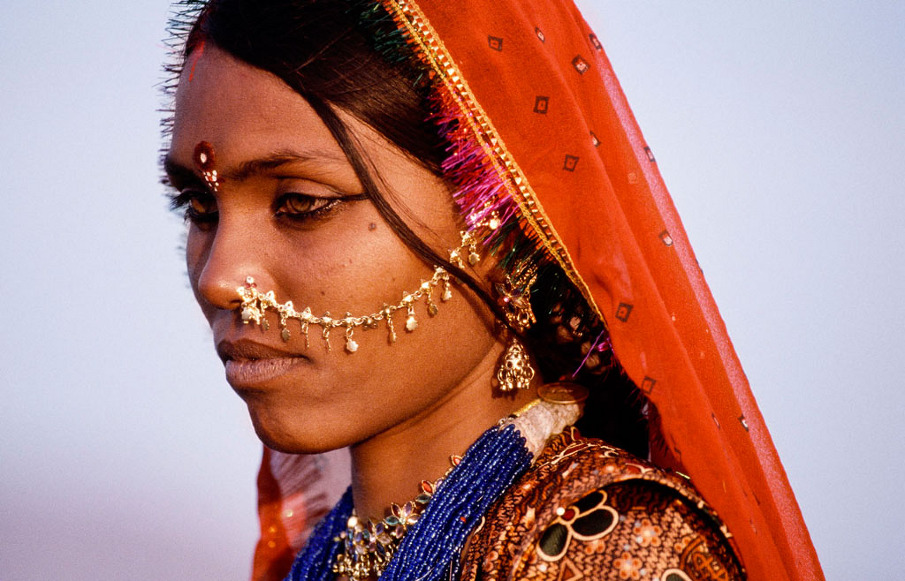 J’AIPUR: Apart from your encounter with the woman on the book cover, how did you meet the other subjects in India that you photographed?

BM: I was with a workshop run by The Palm Beach Photographic Center. The leader had been to India to photograph several times and worked with an Indian travel guide who traveled with us and had contacted local guides in every location that we visited. He also negotiated a price with the head of each tribe so that they advised their people in advance of our visit. 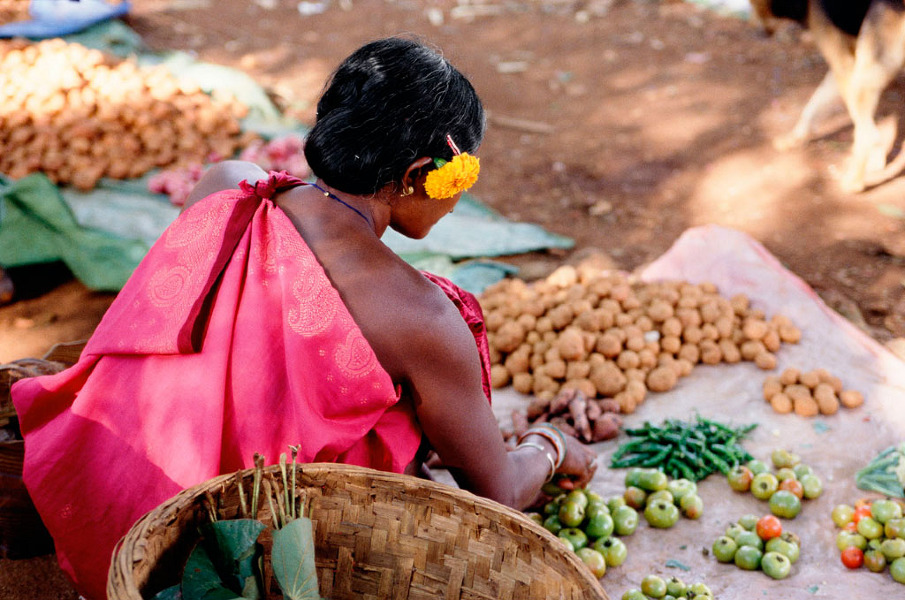 J’AIPUR: What was the most challenging part of photographing India and its people? The most rewarding?

BM: The most challenging part was in trying to cover enormous amounts of territory in a short amount of time. Not only is India vast, but, many places must be reached by poorly paved or unpaved roads making them hardly passable at times. I also found the heat to be exhausting with our schedule. Many times our accommodations were less than adequate – once we were even bumped from our reservations because some government people were coming to town.

The most rewarding was meeting the people, especially in the tribal areas. No one spoke a common language and everyone, with only a few exceptions, was kind and hospitable and willing to be photographed.

J’AIPUR: What kind of camera and equipment did you use?

BM: I used a Canon 35mm Elan 7 camera with Kodak highly saturated color slide film, 100 ISO speed. My lenses were varied, but I depended mostly on a wide angle 28-70 and a 100-400 mm lens. I had a camera bag with other lenses which I used when they were appropriate. I took approximately 3000 images on each of the two trips, never knowing what I had until I returned home and developed the film.

J’AIPUR: What are your thoughts on digital photography?

BM: My thoughts on film versus digital photography today have changed since I visited India. For travel photography, digital is the way to go. No heavy film to carry. You immediately see what you have shot. The days are longer for shooting without flash because of high ISO ability and white balance which doesn’t exist with film. Professional commercial photographers today all use digital photography. Occasionally, a few artistic photographers who work with large format or black and white stills may continue to use film which you see in magazine work or in galleries. There are so many fine point-and-shoot digital cameras today. You can travel light and cover almost all bases with one small unit. 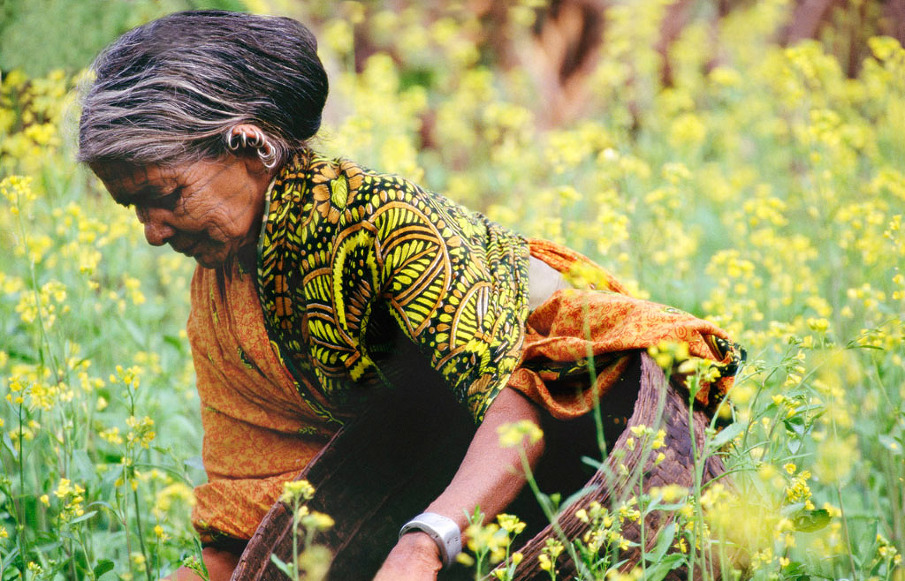 J’AIPUR: How would you describe your photography style?

J’AIPUR: What differences do you find between landscape and portrait photography?

BM: For me, there is little difference between shooting landscapes and portrait photography. Both are alive and unpredictable, influenced by light, air, and movement. People’s thoughts come through in portraiture whereas in landscape it is mostly the photographer’s thoughts that appear. Still, there is a strong crossover.

J’AIPUR: Who are some of the photographers that have influenced your style and thinking?

BM: Many artists, styles, and periods in art have influenced me. Here’s the short list (of which most are artists, painters, and decorative artists):

India: In My Eyes

Barbara Macklowe takes the reader along on an epic road trip through India as she discovers its many sides.

Taking pictures has become an expression of myself. It is about my feelings and my life. When I am behind the viewfinder, I am in the zone. It is a meditation for me. I am my art and my art is me.

J’AIPUR: What advice would you give to someone embarking upon a photography career?

BM: I would suggest starting with digital and spending the extra time learning how to work with the computer. Starting with analog took enormous time and energy as I was still working full-time at Macklowe Gallery, and when I transferred to digital, I really had to start from scratch all over again, and it was a great effort for me. I was well along in my 60s, and it is my experience, that learning new things at that stage in life is just slower than it is when you are ten years younger.

I raised a family when starting out and ran an art/antique business with my husband when my children were young. I was one of the very few women of that generation who was working and raising children and found myself being asked this question often by younger women who had powerful careers and were considering having families. My answer is to follow your own heart, needs, and conscience. One must have the power of your convictions. I would never have been happy staying at home full-time. I loved working and building a business, and I loved being a mother. I always believed that the quality of time that you spend with your children is more important than the quantity of time that you spend with them. 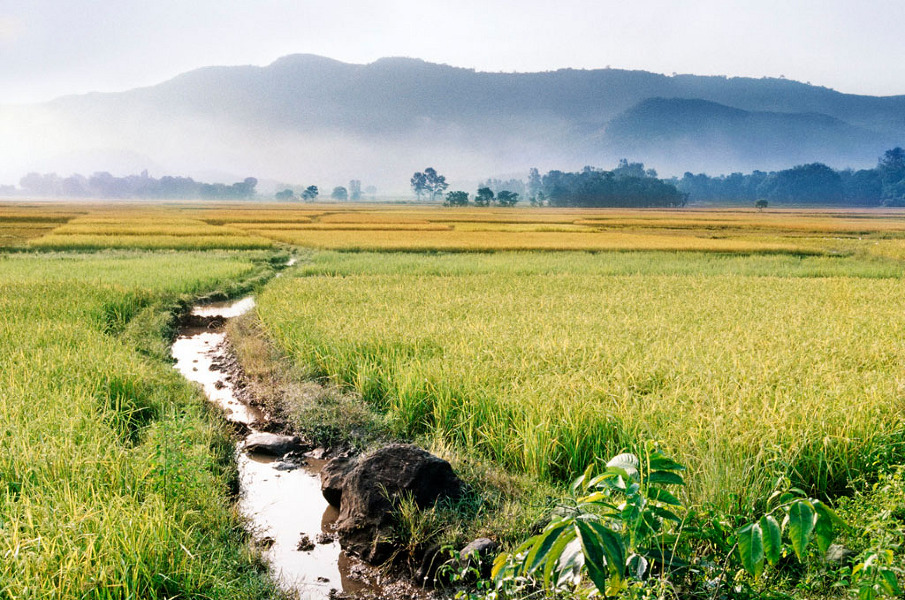 J’AIPUR: What motivates you to continue taking pictures?

BM: Taking pictures has become an expression of myself. It is about my feelings and my life. When I am behind the viewfinder, I am in the zone. It is a meditation for me. I am my art and my art is me.

J’AIPUR: What is next for you creatively?

BM: I have been exploring in-camera double and multiple exposures. It allows me to further my love of abstraction and color. I am able to add artistic flourish to the images once they are on the computer, and this leads to another dimension for me artistically. I will continue to experiment in this way and see where it leads me. At present, this work can be seen on my website in the Doubletime series which is made primarily with flowers. This series has been successfully exhibited at three gallery shows and one of the pieces was acquired by the Guild Hall Museum of East Hampton for their permanent collection.

Read more of J’AIPUR 1 and collect all print editions from our Library. Purchase Barbara Macklowe’s India: In My Eyes book here.