Making More than a Fashion Statement

Maharani Gayatri Devi (1919-2009), considered a fashion icon in both India and Europe, was more than a sum of her chiffon saris. After the Maharaja of Jaipur fell madly in love with her, she went on to steal the hearts of the Indian public who voted her into political office several times.

Maharani Gayatri Devi, who adopted style tips from her mother and grandmother, brought a spirit of glamour and independence to the Royal House of Jaipur.

The Enduring Style of Maharani Gayatri Devi of Jaipur 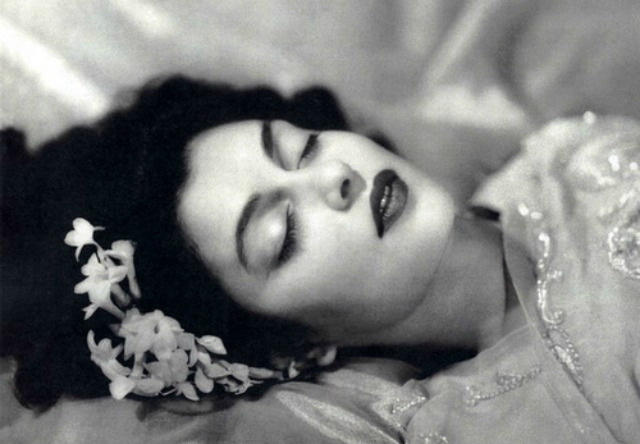 Gayatri Devi, the last Maharani before the princely states were abolished during India’s independence in 1947, left behind an incredible image of the life and times of Indian royalty. She fell in love at a young age with Sawaii Man Singh II, the Mahajara of Jaipur, who already had two wives. In an interview with The Times of India, the Maharani spoke about the excitement of their forbidden love:

There was the challenge of outwitting our elders, of arranging secret meetings…and every now and again, there was a marvellous, unheard-of liberty of going for a drive in the country with Jai, of a stolen dinner at Bray, or of an outing on the river in a boat. It was a lovely and intoxicating time.

However, the Maharaja’s proposal to Gayatri Devi in the back of his Bentley was much to the dismay of her parents, even though her mother, Princess Indira Devi, had also rejected the Indian practice of arranged marriage in favour of love, when she married Gayatri Devi’s father, Prince Jitendra Narayan of Cooch Behar (West Bengal). The young Gayatri Devi was an outspoken girl, dabbling in Western ways. Although their daughter would be inheriting a life of even greater luxury than what she was accustomed, Gayatri Devi’s parents worried her adventurous personality would be stifled in Jaipur where custom kept women in purdah, hidden from view. This conservative approach was at odds with Gayatri Devi’s own upbringing amongst strongly independent women and a tomboyish childhood in the company of brothers. Ultimately, the marriage took place, and her parents’ worries were proven wrong as their daughter went on to live a modern and liberal lifestyle with the Maharaja who wasn’t keen on keeping his favourite queen hidden anyhow.

If a film on her life was made today, I can’t think of anyone who could fit in. She had a quality that’s hard to find these days. The way she held herself, the way she moved, that’s hard to replicate. She was a fun person to be with. Not one of those boring people. 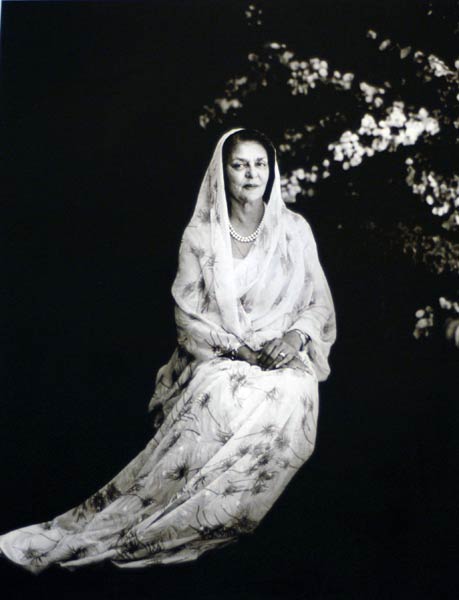 Gayatri Devi’s style was unwavering no matter her role: maharani, politician, wife and mother. As women of Indian royalty were often expected to be dressed in traditional attire, Maharani Gayatri Devi was typically seen in elegantly draped chiffon saris, in soft shades of pastel, worn with modest, long-sleeved blouses. However, being an avid equestrian on the polo fields, she also favoured slacks and wasn’t reluctant to wearing them in public with short bobbed hair. She wore little makeup which usually consisted of a carefully chosen shade of lipstick. Gayatri Devi’s flirtation with the West became even more apparent as she welcomed Jacqueline Kennedy Onassis to India. A popularized image in Life Magazine showed the two women elegantly dressed with matching double strand pearl necklaces.

Gayatri Devi’s mother was also praised for her immaculate taste about whom the Maharani said, “She always knew the best places to buy anything and she shopped all over the world.” During those days, Indian royals often travelled to European capitals to fulfill their indulgences and Indira Devi’s love affair with chiffon originated in Paris. Chiffon, a fabric dating back hundreds of years, was a marker of wealth and luxury due to its construction from silk, which of course made it difficult to wash. Ironically, the name chiffon comes from an old french word for ‘rag’ –  hardly what you would expect a fabric for royalty to be called. Chiffon became more popular after the 1930s when it started to be made with nylon instead of silk, making it much more affordable for the masses. While it is now commonly used to make saris, Indira Devi of Cooch Behar was the first to adapt the chiffon fabric to the traditional sari. The draping of chiffon saris to create a dreamy, romantic look ultimately became Gayatri Devi’s trademark style.

I learnt style from my mother; she taught me all about style – she was one of the most fashionable, most independent and most modern Maharanis yet she always insisted ‘she was ordinary.' 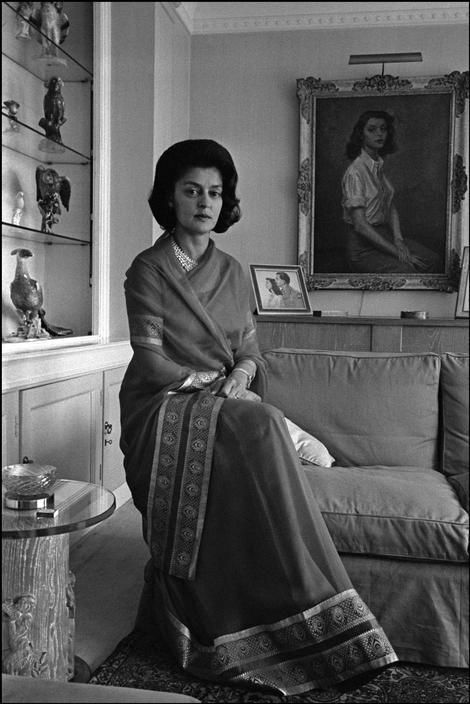 In her memoir A Princess Remembers: The Memoirs of the Maharani of Jaipur, she quotes her grandmother as saying, “Never wear emeralds with a green sari as I had, they look so much better with pink.” These lessons passed on by the women in the family contributed to Gayatri Devi’s immaculate taste which ran through her blood. Throughout the years, her style remained simple yet exquisitely intricate. She maintained a regal look without being covered in jewels. She was nonetheless particular about how she presented herself: hair coiffed to perfection in cascading waves, eyes minimally touched by kajol, lips accentuated by a deep red stain, and pearls adorning her long, elegant neck. No matter the number of years that passed, the Maharani remained an ageless beauty until her death in 2009 at the age of ninety. She had perfected the art of embellishing her ensembles with just the right dose of glamour. Frequently she wore her simple chiffon saris with a large gemstone necklace or earrings, and with a heavier sari, she traded statement jewellery for something much smaller and more delicate.

She seemed to captivate anyone that met her.

She was dressed in a turquoise-blue chiffon sari with silver sequins sparkling like stars on a moonless night. She looked around with her large almond eyes. Everyone stood up. As Hillaire Belloc [Anglo-French writer and historian] once described someone, ‘her face was like the king’s command when all the swords are drawn.'

Even celebrated Indian fashion designer Sabyasachi created five limited-edition saris inspired by the Maharani for his Spring/Summer 2013 collection. As was preferred by the Maharani, he produced saris in shades of soft creams, pinks and blues using fine French fabrics such as organza, satin and tulle and paired them with satin blouses of ten-inch sleeves.

As a young student in the Delhi University I used to sneak into the Jaipur Polo ground to watch some of the finest polo players of the country. The Maharaja of Jaipur, a great proponent of the game, would play there and accompanying him used to be his wife, the Rajmata Gayatri Devi, in her soft and pastel flowered chiffons, a picture of grace and beauty.

For a conservative era, the Maharani made strides for women not only with her unique take on traditional Indian style, but also with a fierce attitude towards living a life of purpose well past her days as the Maharani of Jaipur. She advocated against the practice of purdah, opened several all girls’ schools and was elected not once but three times into political office, even setting a Guinness World Record with her majority win. Today she is remembered for her intellect as much as for her beauty and style.