The Garden of Love and Labour

In the handicraft of phulkari, the 2000 year old traditional flower embroidery of Punjab, relationships are formed during the creative process of threading that are just the beginning of cultural references being woven in and out of the fabric.

Since women practiced the threading socially rather than as an official craft, no formal patterns have ever been documented. All of the embroideries that were created were a mere reflection of the rural life of the women and their families, resulting in unique designs.

The Fading Art of Phulkari 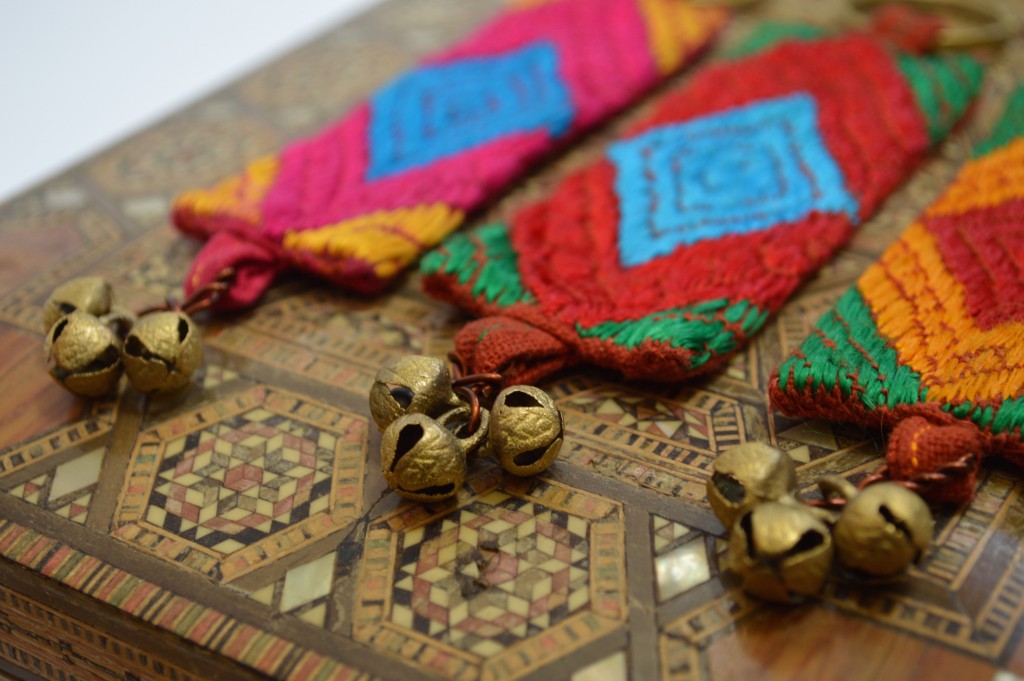 The history and making of phulkari (‘flower work’) embroidery is entrenched in cultural relationships between women, family, and society. Picture this: on a sunny day, women sit under trees on charpoys—beds woven with jute strings—telling stories and creating stunning embroidery on shawls, scarves, and long sheets of cloth. That’s how the age-old craft of phulkari was passed on from one generation to another—never for the purpose of sale but solely familial use—for decades in the region of Punjab. It is an art form that has grown and changed by leaps and bounds over the years and remains at risk of almost being forgotten.

‘Phul‘ (flower) and ‘Kari‘ (work) has been an intricate part of Punjabi culture in both India and Pakistan. Since women practiced the threading socially rather than as an official craft, no formal patterns have ever been documented. All of the embroideries that were created were a mere reflection of the rural lives of the women and their families, resulting in unique designs.

Phulkari might not have been formally documented, but it has been referenced in the Vedas, the Mahabharata, Guru Granth Sahib and Waris Shah’s version of Heer-Ranjha (1766), an epic romance-tragedy being the Indian equivalent of Romeo and Juliet. In Harishcharitra, the biography of the Indian emperor Harsha who ruled North India from 606 to 647, the seventh-century writer Bana Bhatt mentioned, “some people were embroidering flowers and leaves on the cloth from the reverse side,” a description similar to the technicality of phulkari on bagh (the fully covered cloth).

Phulkari work is done with untwisted floss silk yarn called pat and typically produced with the use of darn style stitching on the opposite side of the material. The embroidery was originally made on hand-woven coarse cloth called khaddar. Women often made odhani, long sheets of cloth to  cover their heads and shoulders. Over the years, wearing an odhani became an integral part of the culture and tradition. The coarse khaddar cloth which served as a base for the glossy embroidery work often reflected the tough and colorful life of the Punjabi women. Wearing a finished phulkari added grace, delicacy and elegance to the personality of the women. In many families, the number of phulkaris given to their daughter for her trousseau spoke about the affluence of the family. Red, being the auspicious colour for khaddar, and white used by older women or widows.

A lot of the motifs and designs were inspired by the rural surroundings and women used their creativity to portray that. Phulkari were decorated with flowers, animals, fruits, human figures, huts, pots and scenes from daily life. Animals and birds showed success, beauty, pride, and goodwill. Different fruits symbolized wealth, prosperity, and fertility. Due to the subtle cotton background, every colorful thread showed its vibrancy. The colors prominently used for the floral print were yellow, green, orange, pink and blue. Some of the darn stitches were diagonal, horizontal, and vertical  to bring out the different shades in design. The craft serves as a depiction of the complex rural culture and rich heritage of Punjab. 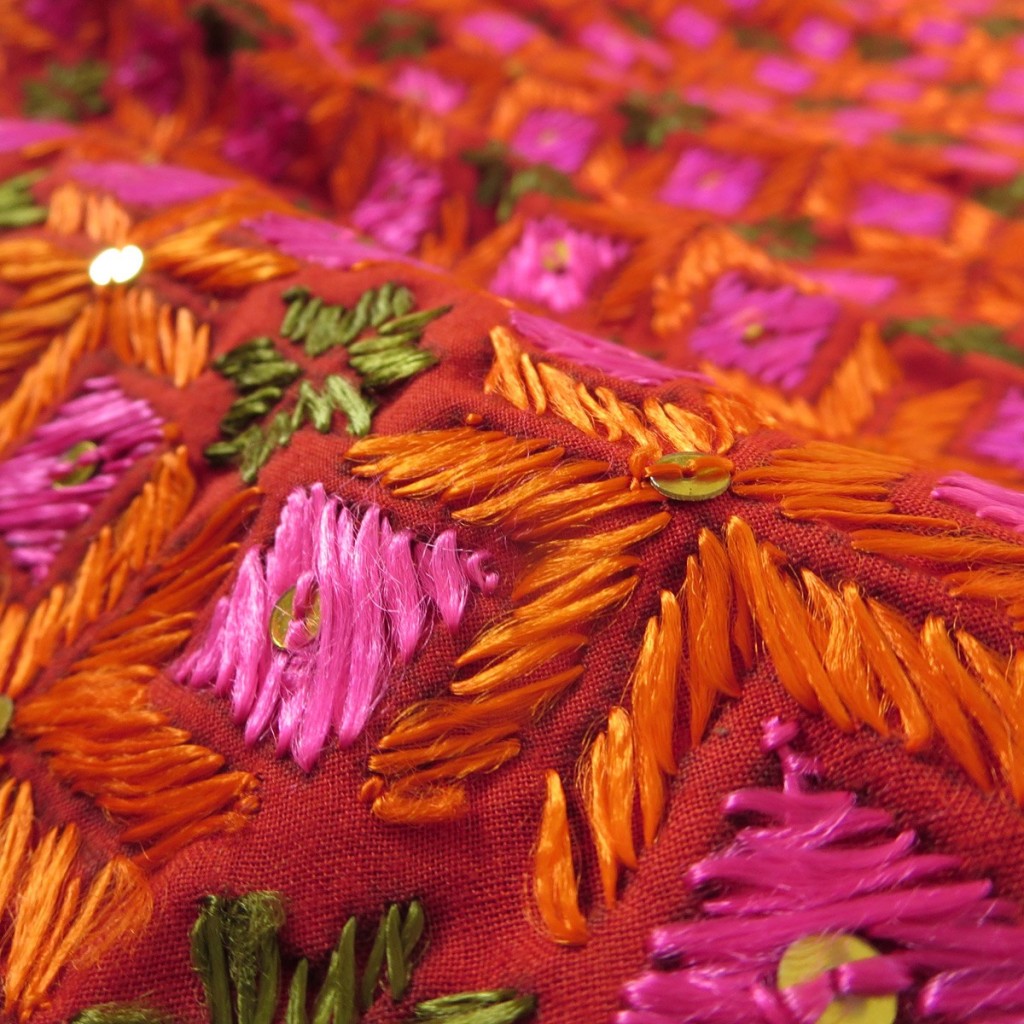 Women used different designs for various occasions. Patterns that covered the entire cloth were called bagh, meaning a garden filled with flowers and these could take anywhere from a month to several years to complete. Vari-da-bagh, meaning garden of the trousseau, is a kind of phulkari also made on a red cloth but has golden-yellow embroidery to symbolize happiness and fertility. The entire fabric is covered with intricate patterns in various colors. Phulkari holds many kinds of sentimental value. For example, a chope is a type of phulkari that is made by the maternal grandmother at the birth of her granddaughter. It is eventually given to her as a wedding gift and done on red khaddar, which is identical on both sides. Completing a phulkari signifies a girl’s ascension into womanhood as cited in the Sikh holy book, the Guru Granth Sahib. “Only then you will be considered an accomplished lady when you will embroider yourself your own blouse.” When a boy is born, the mother wears a phulkari the first time she makes a public appearance. Suber is a type of pulkari worn by a bride during her marriage rituals and consists of five motifs, one in the center and one in each of the four corners. Completing the life cycle, a phulkari is used to adorn a woman’s dead body during the last rites.

Over the years, phulkari designs have changed tremendously. They are simpler and less time-consuming with the use of synthetic threads. Hopefully, the women of India, and particularly Punjab, are able to find new avenues and opportunities to continue this handicraft through which friendships and community run deep. 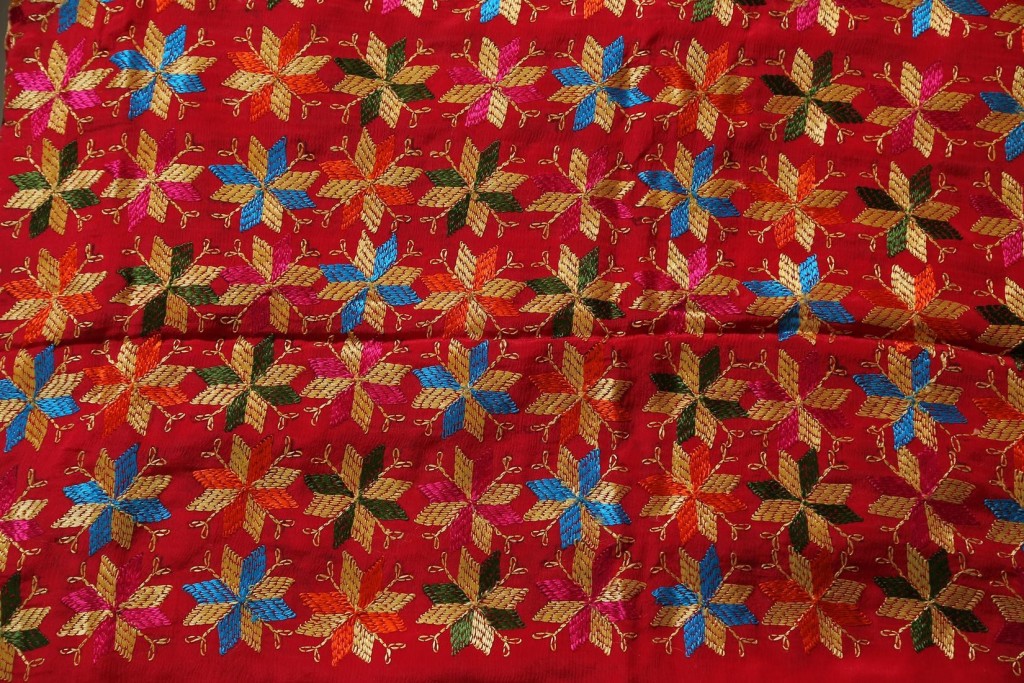