A Visit to an Idolmaker's Workshop

We take a look at life inside an idolmaker’s workshop in Kolkata (India) during the Durga Puja Festival, one of the busiest times of the year, which marks the homecoming of the Hindu goddess Durga after she slays Mahishasura,  the buffalo demon.

People have a lot of fun during the pujas, and once the festival is over, the idols are submerged into the Ganges [River]. I sometimes feel bad since we work so hard on them. But, these are our rituals.

Past Continuous in Kumartuli: The Craft of Idol-Making 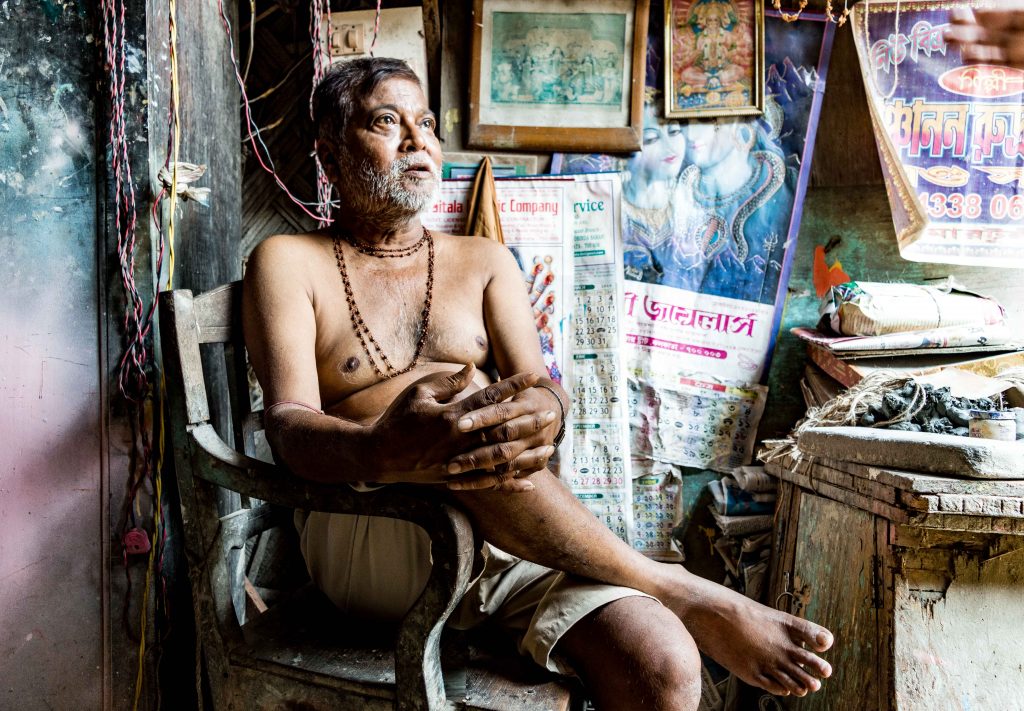 Story and Photographs by Swati Mishra

“Ae thik hi ache,” Panchanan Rudrapal tells me in Bengali with some inhibition when asked about his business of making idols in Kumartuli, a famous potters’ colony in the bustling Indian city of Kolkata. The answer translates to, “It’s alright,” which is the standard reply you might receive if you ask someone here about their health or the city’s economy.

The word Kumartuli comes from two Bengali words: kumhar, which refers to a potter, and tuli, meaning neighborhood. It is one of the oldest areas in Kolkata where life revolves around the annual, ten-day Durga Puja Festival held during the autumn. It’s a religious occasion, a carnival, and a food festival, all at once, marking the homecoming of goddess Durga after she slays Mahishasura, the powerful buffalo demon, and signifies the triumph of Good over Evil.

Clay idols of Durga and other Hindu deities, in various stages of completion, are lined up on either side of the narrow lanes of this artists’ enclave. Sculptures of all sizes can be seen spilling onto the streets from the jammed workshops. While the craftsmen are busily working away in their mystical kingdoms, they hardly notice the presence of curious passersby.

Mr. Rudrapal sits at his desk in what is one of the larger workshops in the area. Beside him, there are framed photographs of gods and goddesses, along with a few small statues. A single light bulb and many electric wires loosely hang overhead. A banner with the name of his shop drapes from the wall. We’re at New Bikrampur Mrit Shilpagar at 40, Banamali Sarkar Street. Mrit means soil in Bengali and shilpagar translates to art hub. Rudrapal is a sixty-four-year-old and seventh generation kumhar carrying forward the family craft of making idols in Kumartuli. The name of his business tells me that Rudrapal’s ancestors are from Bangladesh. “Yes, it was not Bangladesh then. It was all Bangla! Our forefathers were also kumhars. If it weren’t for us, the kumhars, the potter’s wheel would not have turned,” he says with pride.

During the Durga Puja Festival, the citizens of Kolkata visit the gods and goddesses in their pandals, temporary arrangements installed and worshipped in almost every neighborhood. These extravagant sculptures also fuel some healthy competition amongst residents to see who has the most impressive display. On the tenth day or Dashami, worshippers immerse the laboriously-crafted figures into the river—a finale tinged with sadness, because the elaborate celebration has ended, and hope, in anticipation of the subsequent Durga Puja.

For visitors, it is a surprise to see a centuries-old colony thriving in the chaos of north Kolkata. Walking through the labyrinthine lanes of Kumartuli provides a multi-layered sensory experience. There’s a calmness from the sight of the clay sculptures—animals, demons, gods, and goddesses—as a rustic, monochromatic visual palette until they are painted and dressed in their finery. The air is laden with the smell of clay, mud, paints, pigments, moisture, and household cooking. A stream of sounds such as the cutting of wood, the noisy engines of machines, the chatter of voices, as well as Hindi and Bengali songs blaring from radios all provide the daily soundtrack for this creative community.

Read the complete story in our print edition.

Kumartuli is a traditional potters’ quarter in northern Kolkata, India. It is a neighborhood famous for making idols of Hindu gods and goddesses for various festivals.