I hope women will walk away with a sense of empowerment about the contradictions we have—the struggles, wanting to fit in, a status quo idea of what a woman is supposed to look like—that they leave feeling empowered and knowing those definitions can be rewritten, and that we are here to rewrite them; that even if we come from traditional cultures where women have been boxed into being a certain way, we have the power to create our own destiny.

Nadia Manzoor Finds A Place of Belonging on the Theatre Stage 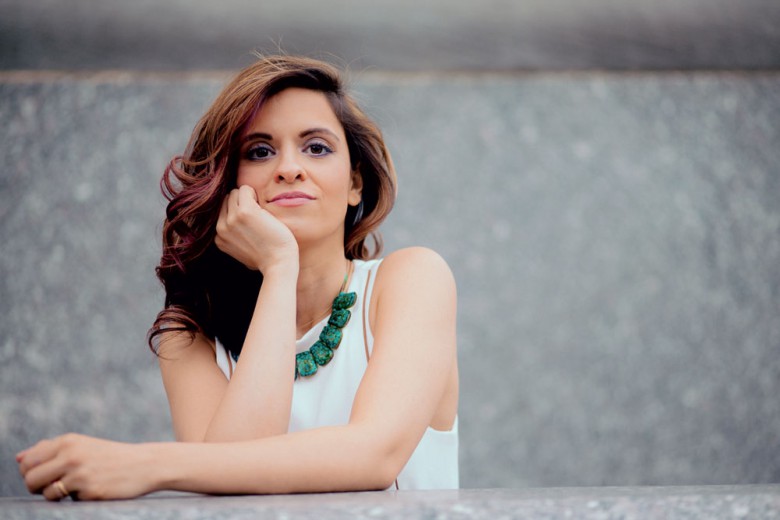 Playwright Nadia Manzoor has finally found her groove on the international stage after spending much of her life wondering where exactly she fit in. Growing up in a Muslim family in England and settling in New York as an adult, Nadia has experienced the contrasting worlds of East and West with equal intensity. After completing her M.A. at Boston University in Social Work and Policy as well as taking writing courses, Nadia began blending her passion for social initiatives and the arts by bringing her autobiographical stories to the stage. Her play Burq Off! stars solely herself —“one woman, 21 characters, a burqa, a bikini”—and explores the idea of finding “courage to challenge the people that we care about.” The production represents the views of her own family which contradicted the Western culture that she was growing up in. Nadia’s creativity and search for empowerment is contagious. Audiences laugh during her show and many—especially those who can relate to Nadia’s upbringing—leave the performance thinking deeply about growing up under rigid expectations. When she’s not on stage, Nadia is busy producing performance art and providing a platform for others through her company Paprika Productions. She is also taking Burq Off! to many more stages around the world and producing a sequel addressing the prevalent question we usually ask after questioning social norms— ‘What now?’

How did you come to a decision to turn all of these personal experiences into a play rather than a novel or a short story?

I would say this material has had many iterations. It started off being a thesis when I was doing my Masters in Social work and Policy. I was writing a lot about cultural integration and women’s issues. I was using a lot of my own experience to talk about these things in an academic way. And then it evolved into more storytelling, and I started to write my personal experiences in journaling, and just trying to understand the confusion that I had been in for many years. I started taking a writing class at Gotham in New York City and the stories found themselves on a page just through my catharsis. I also started doing improv at the time and found my voice through comedy and doing characters. I had a total love for improv and there was this natural synthesis that happened, of me working on a memoir, that was the origin of this story. And my characters and comedy and so there was a natural merging of my interests that formed into this show.

As things were forming on the page, did you have a clear idea as to what the production would look like on the stage, or has it been an organic process?

Yeah. I had no idea. Even when we had a script. I met this amazing director, Tara Elliott, my creative partner. She actually works for my production company now. We had such great synergy and she very much started to see it as a play whereas I was much more into the writing and the characters. She really started to see the macro: staging the set, the lights, and really made it into a physical performance.

What’s it like going through a process working with material that could easily offend so many people?

I think I had a lot of support from my creatives and peers. There will be people who will be offended and it’s part of creating a little bit of a ruckus where people are provoked so they ask questions. In order to go into change you need to be a little uncomfortable. A space of discomfort allows growth. So I kind of knew that, but at the same I personally was definitely afraid and self conscious about how it was going to be received. Am I really going to be get up in front of my community, other Pakistani Muslims, and older people, and do this show? It just became something that I had to do so strongly, the compulsion to continue the process. I just started to trust that, the process. There have been times when people have been offended, and times when people have been applauding me for my courage and bravery and find it to be a relief and saying, “Thanks so much for saying things we have a hard time saying.” It’s been beneficial overall.

Your brother and your father have really embraced this production. How does that feel? And has their reaction surprised you?

The fact that my Dad has become the biggest fan and supporter of the show moved me beyond words. It’s really healed and transformed our relationship. I think it would have surprised me if it wouldn’t have been an evolutionary, gradual shift. If it just went one day from him being stern and strict, to the next day being,“Beta, I approve of everything you do.” Because it was gradual, and it took a lot of blood, sweat, and tears to get to this stage, I feel like I’ve earned it. I’ve worked really really hard to see eye-to-eye and have compromise in our relationship and not just be: “This is the way Pakistani muslim women do things.” That’s very much how I grew up. “This is the way a Pakistani woman is, and you are not allowed to veer off track.” And now of course, from a traditional standpoint, I’m totally off-track. So, I wouldn’t say it was a shock. It was definitely a shock that my brother came to the show. I wasn’t expecting him to come. He said he wasn’t coming and then he actually surprised me by coming to the show. It was really moving. We haven’t had the same level of reconciliation that me and my Dad have had, but it was a big gesture.

Were you in communication with your father while the play was being produced meaning, while you were working on it, had you revealed anything to him during this process?

He knew I was working on it and I had also read sections of the material to my Dad and my brother. He knew it was about our life, but he had no idea what to expect.

What do you hope women, and not just Muslim women, but women of many faiths, who might be experiencing these sort of conflicts, walk away with after watching this?

I hope women will walk away with a sense of empowerment about the contradictions we have—the struggles, wanting to fit in, a status quo idea of what a woman is supposed to look like—that they leave feeling empowered and knowing those definitions can be rewritten, and that we are here to rewrite them; that even if we come from traditional cultures where women have been boxed into being a certain way, we have power to create our own destiny. In the story you see a lot of the struggle and confusion where I lie about things, and I’m not perfect, and that’s part of embracing our humanity. We’re not perfect. It can be ugly figuring things out with the people we love, and that’s okay. There’s a lot of pressure on women to be perfectly packaged and not go into the fire. To go, “Wow, she had that conversation with her Dad and maybe I can do it too. Maybe I can have that conversation with my boyfriend or my boss…”

With so much of the world’s attention on the Muslim religion, has this impacted your show’s popularity at all?

That’s really hard to say. I think there’s definitely more of an interest in these issues. There’s a peaked interest in Muslim issues from that standpoint, yes. People in the show are often, afterwards, really interested in getting my opinion. People are thinking about Islam in a much bigger way.

What’s the most challenging part of playing 21 characters on stage? That’s a lot of characters.

Yeah. I have to make sure my voice is trained, and ready, and warmed up. There’s such a different vocal range so I just have to make sure that I am hitting all of the different ranges in order to portray the characters. That’s probably the most challenging part.

I love playing my mother. She was such an abundance of joy. She’s passed away now, so for many reasons, I get to experience her again through myself which is really beautiful. She radiates joy and love—this innocent love—where there’s no agenda.

What advice would you give to an aspiring playwright who wants to focus on these sort of social issues?

One of the biggest things for me is that we all have something that’s inkling in us that we think about a lot. There’s something that irks us all, and it could make us angry, and I think these responses inside us are there for a reason, and I feel in true art, we are able to find a beautiful voice for our anger; the thing that makes us mad, the things that don’t sit right with us. My advice (I know it sounds obvious) is write what you really care about. Instead of looking for an amazing plot, and if you are trying to reflect the social issues that are coming from within, write what you have to write, to tell the story. I had to tell the story because I was always telling the story to all of my friends. So everybody who knew me would start to hear about my background, my past, how I wasn’t allowed to date anybody, how my parents were really strict, how my mum’s dying, how my brother hates me. Those were just the stories I would tell about myself all the time because it was still being resolved within me. And now I just refined it, and cultivated it, into a story which is a performance.

As a playwright and as a performer, what would you most like to most accomplish artistically this year?

A few things. One is the continued push for Burq Off! to be seen by many more people, in different cities, as it evolves as a production, a higher level of production. As a performer, I want to be more vulnerable as a performer. I’m working on a sequel to Burq Off! which is called Jerq Off! That’s what begins when she enters the western world, supposedly free. I’m really excited because it’s going to be a lot more collaborative even in the conception of the story. Bringing more multimedia into it and making it an interesting show. It’s going to be very different. I’m super excited about that. I’m also presently working on a book that’s like Burq Off! Jerq Off! but in a denser memoir, and I’m also developing, and writing, and producing a comedy web series with my friend who’s an Indian stand-up comedian.

If you could have coffee with any playwright, dead or alive, who would that be?

You could call him a playwright because he writes his one-man show. I would say Russell Brand because of many reasons. One is because, I find, at least in his last show, a real authentic care for humanity as a whole, and he’s using his art to express that. And now, how’s he’s using his power and privilege to make people aware of issues that he really cares about, and he’s basically putting himself out there. It’s so inspiring to me.