Adventure to me is the thrill of exploring the unknown or unfamiliar. I am primarily inspired by my travels and in that sense, the adventure that each experience provides, translates into the collections I do.

From Manila to Manhattan: A Young Designer Takes Flight 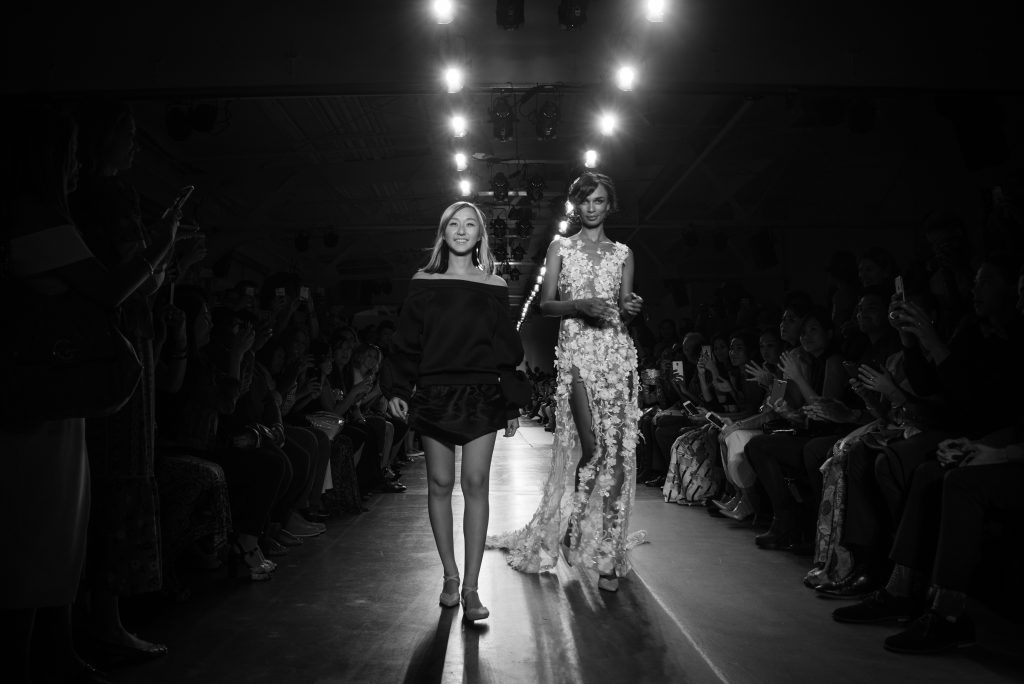 J’AIPUR: You grew up in Manila and went to school in London. How does that reflect in your designs?

ROSENTHAL TEE: My designs are definitely a reflection of my appreciation for diversity and culture. Having the privilege to experience both Manila and London has given me I suppose, a finer eye in the fashion landscape. I try to always insert my heritage into the work I do, and the experience as a student in London allowed me to hone that sense of nation into a global image that goes beyond the confines of country and without coming off as costume or gimmick.

J’AIPUR: Describe your path to becoming a fashion designer.

RT: My path as a designer happened organically. As a child, I used to enjoy music and painting so I had always known I would end up in the creative industry. Upon finishing my business degree I couldn’t get fashion out of my head, and so pursuing further studies seemed the logical step. I would place myself as one of those people more interested in the process of creating rather than of the final image, and so I always opt to let the work and craftsmanship in the intricate pieces I do speak for itself.

J’AIPUR: How has the CAAFD (Council of Aspiring American Fashion Designers) organization in New York City been instrumental to your career as a designer?

RT: The CAAFD has definitely paved the way for designers such as myself, to really engage with a new audience on a global fashion scale. New York is easily one, if not the fashion capital of the world, and the organization allows creatives who would usually not have the connections, to make their way into the U.S. market.

J’AIPUR: What inspired you while creating the SS’17 Rosenthal Tee collection?

RT: For Spring Summer 2017 I really went back to my roots as an individual, and as a label. I am Chinese by ethnicity but I definitely grew up Filipino, and this time, I wanted to reimagine the Filipina my way. The collection is called “The Girl, Sisa” and I essentially played around this fused characterization of two important Philippine literary female protagonists: Sisa, the crazed obsessive, and Maria Clara, the delicate beauty (of José Rizal’s iconic novels Noli Me Tangere and El Filibusterismo). Beyond the top-level stereotypes placed on these two women, I began to question for myself at a more existential level, the idea of femininity in society and how each one of us could be both beautiful and ugly. The imperfection of these two characters and their perceived strengths and weaknesses is what makes them beautiful and so I set upon a quest to discover and accept the duality of both the wild and the controlled tendencies of femininity through a 33-look collection that begins with separates and ends with gowns.

J’AIPUR: This was your second time showing at New York Fashion Week. What were some of the differences for you this time around?

RT: Coming back to New York Fashion Week following what I would call my own crash course in the scene is that I came back much more prepared and aware of the aspects of pre- and post- show work that is demanded by the New York fashion industry. This time, there was less preparation needed in New York as my team and I had already worked on other facets back in the Philippines. For example, I had already prepared the collection look book shots, the styling and music requirements that I would need for the actual show at Pier 59 Studios in New York.

J’AIPUR: What are some of the differences between showing your collections in Fashion Weeks in Asia versus New York?

RT: A major difference I see between New York and Asia is in the audience that is invited to the shows. My experience in Asia is that most attendees already exist as the designer’s clients, while in New York, viewers are generally social media mavens, buyers and purchasers of national department stores and exclusive boutiques.

J’AIPUR: You describe your brand as one that “embodies the soul and spirit of adventure.” What does adventure mean to you?

RT: Adventure to me is the thrill of exploring the unknown or unfamiliar. I am primarily inspired by my travels and in that sense, the adventure that each experience provides, translates into the collections I do.

J’AIPUR: Who is the Rosenthal Tee woman that you design for?

RT: I describe the woman I design for as one that is nostalgic, quirky, and subtle. She is a global woman on the go, with an easy sense of sophisticated style that is in between the classic and the trendy.

J’AIPUR: How does it feel to be one of the few designers from Asia to be showing at New York Fashion Week?

RT: It definitely feels surreal to be a minority in a sea of great American designers but beyond the confines of race, showing in New York makes me feel that I have something valuable to contribute to the industry. At the same time, I’m highly aware as a young designer that I still have a lot to do and improve on in order to really imbed myself into the New York fashion industry.

J’AIPUR: In addition to elegant day and evening wear, you also design bridal wear. Is there a celebrity in the Philippines or abroad that you would love to create a custom gown for?

RT: I’ve been fortunate to have had the privilege to dress the Philippines’ most celebrated actresses already, and now I look beyond and have set my eyes on dressing young Hollywood! It would be a dream to have the likes of Emma Watson, Kristen Bell, the Fanning sisters, Michelle Williams, Kendall Jenner, and Chloe Grace Moretz in custom Rosenthal Tee. I think their energy and youthfulness is definitely in line with my label.

J’AIPUR: What has been your greatest challenge so far as a designer?

RT: My greatest challenge as a designer comes as each season progresses. I am always in a constant struggle to design and produce better pieces, and I think this is the sort of work ethic that can be both a blessing and a curse.

J’AIPUR: What advice do you have for aspiring fashion designers?

RT: Put all of your work online. There are multiple designer platforms that allow emerging designers to introduce their work on a globalized scale and I believe that is what has helped me put my label at one of the world’s most important fashion capitals, especially as I originate from the Philippines.

The designer drew inspiration from the female protagonists of Filipino novelist José Rizal (1861-1896).

It definitely feels surreal to be a minority in a sea of great American designers but beyond the confines of race, showing in New York makes me feel that I have something valuable to contribute to the industry.