Expatriate French artist Jacques Majorelle (1886-1962) created one of the most beautiful gardens in the world, the Jardin Majorelle in Marrakech, famously associated today with the late fashion designer Yves Saint Laurent.

Jacques Majorelle's masterpiece, the Jardin Majorelle, is as intense as the vivid blue colour that bathes the botanical garden he cultivated back to life in Marrakech.

Walk past the arched iron gate set between high earthen walls on Rue Yves Saint Laurent and you enter a garden oasis far removed from the bustling city of Marrakech. Immediately you are welcomed by an enclosed square fountain surrounded by beautiful terracotta tiles. As you move forward, the only sounds are the hushed voices of visitors who step gently along the meandering paths, the chirping of many species of birds and the rhythmic stream of water that flows from the numerous fountains and pools that fill this peaceful property. Outside city noise is instantly muted as the deep cobalt blue, known today as Majorelle blue, casts a mystic spell on anyone who wanders in this twelve acre garden retreat. As the most visited site in all of Marrakech, Jardin Majorelle is one of the great examples of a city landmark where the worlds of art, design and fashion coalesce to create a living, breathing masterpiece as though it were freshly painted on canvas by its passionate artist, Jacques Majorelle. 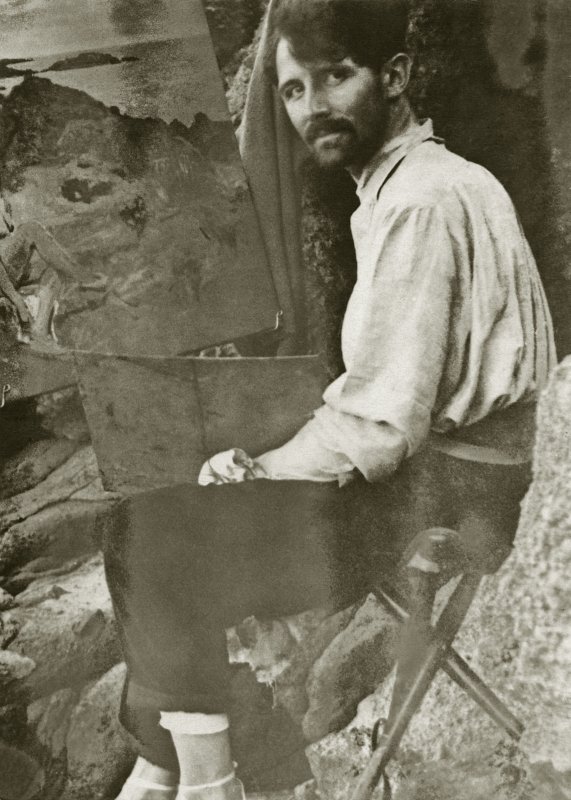 Early on, the young Majorelle, the son of Louis Majorelle, a famous furniture maker, was influenced by his father’s work during the Art Nouveau period which produced pieces inspired by elements in nature and characterized with heavily flourished lines and shapes, coined as the ‘whiplash’ treatment.  After completing studies in architecture and fine arts in his native France, Jacques Majorelle travelled throughout Europe, Egypt, and finally Morocco, where he settled. He was enchanted by the Arabic culture and devoted the remainder of his life’s work to celebrating the landscape and people of his newly adopted country.

After several years of painting scenes of life in the villages and souks, he published Jacques Majorelle, Road Trip Diary of a Painter in the Atlas and the Anti-Atlas, in 1922. It was in 1923 that he purchased a 4-acre plot of land in Marrakech where he lived and worked in a Berber-style building with a high stone tower, known as a borj in Islamic architecture. Here, he also produced fine leather goods and furniture pieces. He left his mark in places such as the luxurious La Mamounia property where he painted the ceiling of the restaurant and also designed advertising posters for the Moroccan tourism industry. After acquiring more adjoining land, he built a cubist-style home, in favour of the avant-garde art movement that was taking place at the time, and took his lifelong love for flora and fauna and set to work for forty years to create one of the world’s most enchanting gardens. Collaborating with botanists from around the world, Majorelle acquired a wide variety of plants and trees. Each species of cacti, exotic plants and trees was placed with precision as he played with the effects of light and shadow within this garden which became his ultimate masterpiece. Majorelle added drama by splashing the walls of his villa and the garden with a bold blue colour he created in 1937, inspired by a paint made originally in the 15th century from crushed semi precious lapis lazuli stones more expensive than gold, and still difficult and expensive to replicate today.

This garden is a momentous task, to which I give myself entirely. It will take my last years from me and I will fall, exhausted, under its branches, after having given it all my love.

And fall he did, except far from his beloved garden. The Jardin Majorelle became an expensive passion project forcing Majorelle to open it to the public in 1947 and charge an admission fee. This wasn’t enough though, so he was forced to sell it, piecemeal. Life continued with a series of misturns for the artist including a divorce and two car accidents which forced him back to France to seek treatment. He passed away in Paris in 1962, leaving the garden in shambles. The Jardin Majorelle eventually came to the attention of fashion designers and partners Yves Saint Laurent and Pierre Bergé in 1966 during their first visit to Marrakech.

We were seduced by this oasis where colours used by Matisse were mixed with those of nature…and when we heard that the garden was to be sold and replaced by a hotel, we did everything we could to stop that project from happening.

The duo purchased the Jardin Majorelle in 1980 and brought it back to its splendor with new plant species, refined irrigation systems and an extensive team of gardeners. Yves Saint Laurent lived and worked here, as Majorelle had done, which inspired many of his fashion collections. The Jardin Majorelle is where the designer’s ashes were scattered when he died in 2008. His longtime partner, Pierre Bergé, then donated the garden to their foundation in Paris and in 2010, the street outside was renamed as Rue Yves Saint Laurent in honor of the designer. Within the garden, there exists a memorial consisting of a Roman column from Saint Laurent’s Tangier home which has been placed on a pedestal with a plaque bearing his name.

Jacques Majorelle’s original studio has been converted to a small Berber museum that houses artifacts from various indigenous tribes around Morocco. Here, an assortment of jewellery, weapons, leather goods, basketwork and textiles are on display reflecting the richness of the Berber culture about which Pierre Bergé noted:

“The Berbers have always been rightly proud of their culture. They have not ceased to reclaim their identity in spite of the vicissitudes they have faced. In Marrakech, in Berber country, in the Jardin Majorelle created by an artist who painted so many scenes of Berber men and women, the idea of this museum occurred to us quite naturally.”

There is also a museum bookshop with an extensive selection of works about Morocco, Berber art and of course, Yves Saint Laurent. Pierre Bergé’s book which contains photographs and illustrations from their life in Morocco, Yves Saint Laurent: Une Passion Marocaine, also sits on the shelves here. In addition, a small gallery is dedicated to images from Saint Laurent’s famous ‘LOVE’ posters which he used to send as greeting cards to friends and clients.

Under the direction of legendary interior designer Bill Willis, a boutique and courtyard cafe were installed into the design of the garden. The boutique, which opened at the Jardin Majorelle in 2001, is where beautiful items handcrafted by Moroccan artisans can be purchased. The high quality artisanal products and objects serve as an ode to the spirit of Saint Laurent’s designs: embroidered jackets, tunics, silk slippers, cushions, pouches, passementerie belts and jewellery. There is also the fragrance ‘Jardin Majorelle’ containing notes of orange blossom, cedar and spices to instantly evoke scents of springtime in Marrakech. The chic Café Bousafsaf, named after Jacques Majorelle’s first house, serves tea and sandwiches.

Jardin Majorelle is a serene escape from the dusty city of Marrakech and its surrounding desert landscape. Here, one can wander or sit and contemplate the architecture and vegetation that has composed this marvel which serves as a reminder as to what hard work and passion can accomplish, as evident in the artistically rich lives led by visionaries such as Jacques Majorelle and Yves Saint Laurent. 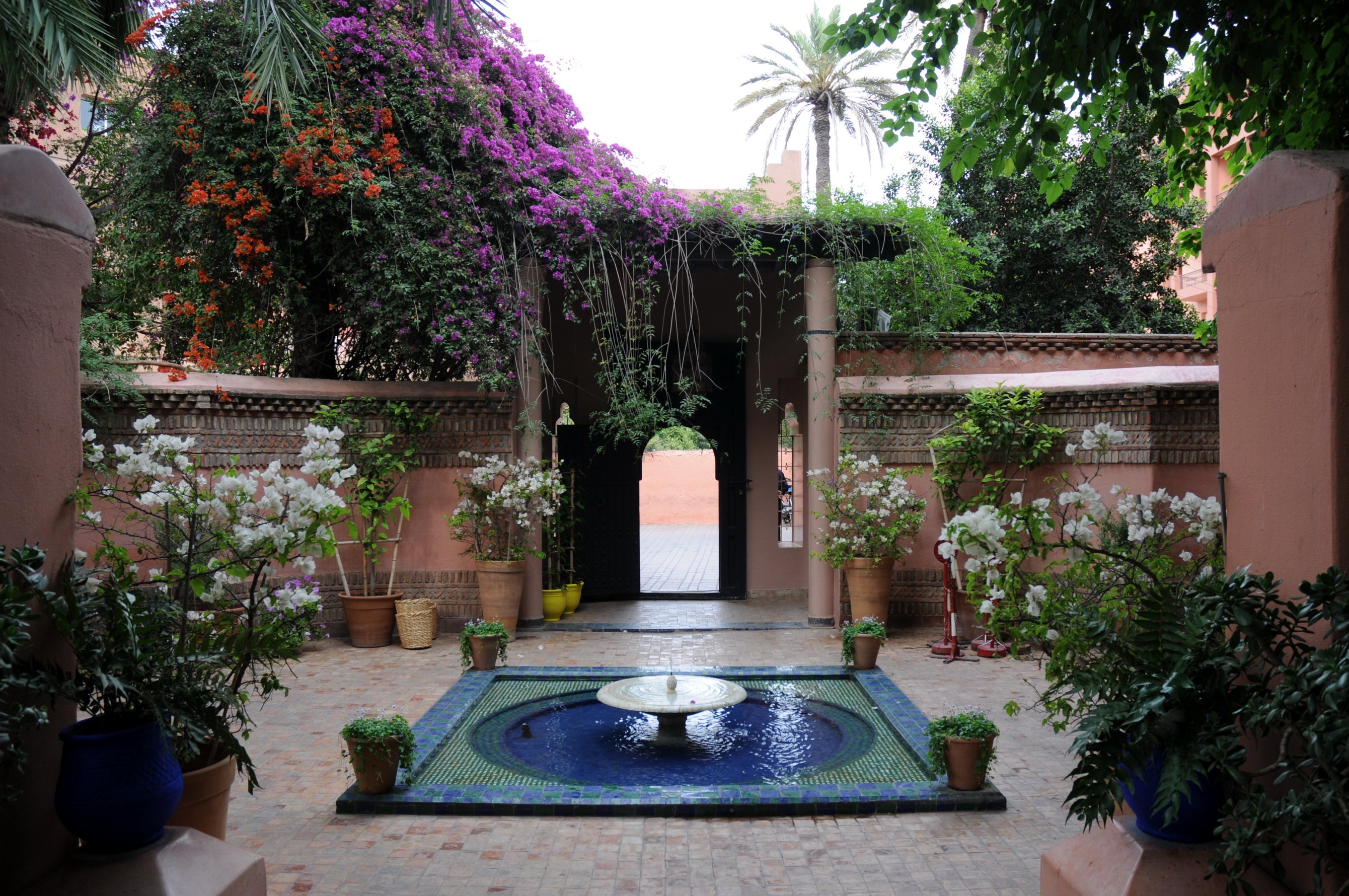